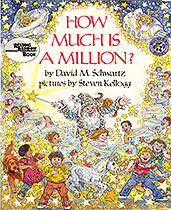 HOW MUCH IS A MILLION?, by David M. Schwartz, illustrated by Steven Kellogg, HarperCollins, 1985.
How much is the number one million and how is it written numerically? What does each of those zeros mean? How about a billion? A trillion? How can we understand these numbers in terms of our everyday lives? And how do these large numbers compare with each other? Published in 1985 and translated into many languages, David Schwartz’s How Much Is a Million? has become the classic children’s book in the area of big numbers. By extension, it can be used to explore all numbers.

For years, the author has collected examples of student projects that meet education standards by drawing upon How Much is a Million? The creativity of students and teachers is impressive, instructive and sometimes hilarious.

In some cases, students use the book as a model to explore their own “million” (ex. “A million basketballs/cats/hot dogs would go how far from this school?”). In other cases, students confirm the mathematics behind the author’s statements. Sometimes high-order thinking is involved as students develop a mathematical strategy and use number operations and statistics to test a hypothesis (“The average height of an elementary school student is shorter than what Schwartz claims in the back of the book”).

When he speaks to educators, whether in live appearances or via interactive videoconferencing, David projects images of student work that illustrates the following National Education Standards

Number and Operations
Understanding Numbers
Ways of Representing Numbers
Relationships Among Numbers
Measurement
Understand Measurable Attributes of Objects and the Units, Systems and Processes of Measurement

This book can be, and has been, used in all grades from K-8 and beyond. By using the author’s notes at the back, even middle and high school students can engage the mathematics in an age-appropriate way. Teachers of primary grade children can apply the same approach to numbers smaller than one million. The book addresses CCSS standards for Grades 4 and 5:

Grade 4 “Students generalize their understanding of place value to 1,000,000, understanding the relative sizes in each place. . . Recognize that in a multi-digit number, a digit in one place represents ten times what it represents in the place to the right.”

Grade 5 “Recognize that in a multi-digit number, a digit in one place represents 10 times as much as in the place to its right and 1/10 of what it represents to its left”

These concepts are central not only to How Much Is a Million? but also to David’s companion work, On Beyond a Million. In that book (and in David’s interactive videoconferencing presentations), popcorn is used as a math prop, and a vehicle for teaching the meaning of place value with drama and humor.

Teacher Comments
“We were so fortunate to work with David Schwartz. The students really enjoyed listening and learning about how he gathers his ideas for poetry. They found it interesting how he weaves science and math into his Where in the Wild? “  Kerry Murphy, 3rd grade teacher